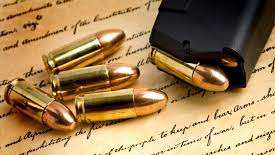 Home
news
What is the Second Amendment?

The United States of America has an exciting history. Once you start researching it, you will find many exciting events and people who shaped the country. The first ten amendments of the legislature were formed on December 15, 1791. At that time, the first ten amendments in the Bill of Rights were ratified. The Bill of Rights was basically for the protection of the rights of all American citizens.

It guarantees the citizens of America fundamental civil rights and liberties like freedom of speech, press, and religion. Out of all the amendments, the Second Amendment is the most controversial because it gives the citizens the right to bear firearms. In the constitution, the second amendment declares, “A well-regulated militia, being necessary to the security of a free state, the right of the people to keep and bear arms, shall not be infringed.”

That is why you would often see many people hoisting a gun flag on their cars or outside their homes to display their support for the gun laws and encourage others to support the cause.

Why was the Second Amendment necessary?

The Second Amendment is a highly politicized amendment in the country wherein, legally, people have the right to carry firearms, and the government cannot apply regulations on it. As a result, almost half of the country is pro-gun and supporters of the idea of Americans having the freedom to bear firearms.

It is a unique amendment. Only three countries in the world give their citizens the right to keep and bear arms. The United States, Guatemala, and Mexico are the only countries that provide such constitutional rights to their citizens. But contrary to popular belief, the amendment was not added to the Bill of Rights because people needed to carry firearms for hunting purposes. It was necessary because of run-ins with the foreign invasion groups and to help law enforcement agencies.

Instead, the right was ratified in the constitution to help the people protect themselves from oppressive countries.

What does a well-regulated militia mean in the amendment?

In the amendment, the term “well-regulated militia” refers to a group of people who can act as a military force at the time of any invasion, war, or other such emergencies. In those times, the militias could be called by the law enforcement agencies at any time to assist with raids or invasions, thereby giving them the power to act as the local police force.

Does the second amendment only protect the right of militias?

No, that is not the case. According to the supreme court’s rulings, the second amendment gives individuals and militias the right to bear firearms. It is the central question that still divides most people. However, many favor the said ruling and proudly display their appreciation for the second amendment with a gun flag.

What are the gun laws in the country?

The second amendment ensures that every citizen can carry a firearm. The amendment does not restrict or limit the government to put any regulations on gun laws. Gun laws vary from state to state, but they are generally in place to keep guns away from those who have ill intentions. So, the government has agencies and systems that run background checks to keep track of those buying the weapons.

Moreover, there is a particular clause regarding weapons citizens can purchase. For instance, people can not own automatic weapons. However, it is permissible to hold them if the firearm was made before 1986.

So these are some facts and information that you must know about the second amendment. A good understanding of the history of one’s country makes you an informed citizen.